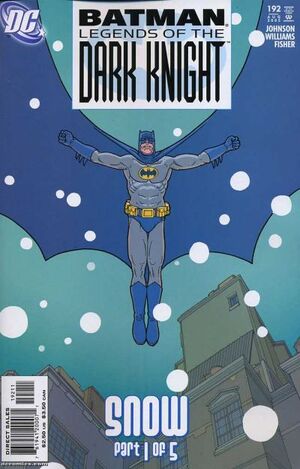 Appearing in "Snow, Part One: Drift"Edit

Synopsis for "Snow, Part One: Drift"Edit

One, night, Alfred goes down to the Batcave with a sense of unease and finds Batman sprawled, riddled with holes. The next morning, Bruce is trying to attend to business as usual, albeit covered in bandages, when Alfred tells him he's over-reaching himself. Bruce explains how his move on gangster Peter Scotta went sour and he got shot. Alfred suggests that he needs proper rest and should consider getting help. Bruce mentions Commissioner Gordon and D.A. Dent, and that they're more than a match for Gotham's problems. Alfred adds that that assumes Gotham's problems stay the same. Elsewhere, the wife of Victor Fries worries about a doctor's appointment about her tremors. Fries comforts her and says that he's nearly finished a project that will get him promotion. A technology R&D doctor, he goes to work on a cryo unit, while a co-worker brings up worries about military applications. Fries' assurances are interrupted by his boss' demands for a test on simulated human targets; their military investors want their money's worth. A call comes through that his wife has collapsed in the doctor's office. Elsewhere, the cops are trying to negotiate with a gunman holding several people hostage in a bank. Batman goes in, shots are fired, and Batman tosses the gunman out the window. Later, Gordon takes Batman to task after his rash methods nearly resulted in a civilian death . Batman says that he urgently needed Scotta's file, which Gordon refuses to give him. They both leave after exchanging harsh words. Elsewhere, Mrs. Fries is now seriously ill. The diagnosis is Huntingdon's chorea, a hereditary disease that will be incapacitating and cause dementia.. Fries leaves in a temper, determined to do something. Elsewhere, Batman meets with D.A. Harvey Dent to try and get the Scotta file he's been compiling. Dent refuses, saying that he doesn't have much, certainly not enough to act on.Back in the Batcave, Batman complains about his allies as Alfred changes his bandages. He says that he does need reliable help, and will pick his own people. On his desk are a number of personnel files.

Retrieved from "https://heykidscomics.fandom.com/wiki/Batman:_Legends_of_the_Dark_Knight_Vol_1_192?oldid=1483998"
Community content is available under CC-BY-SA unless otherwise noted.