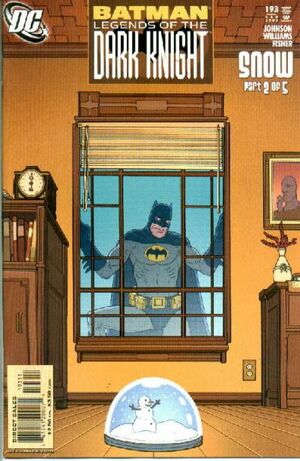 Eighteen days previous. Batman is recruiting. First is Gerard van Daalen, ex-green beret, discharged as the random scapegoat of a higher-up scandal, lacking a purpose. Then, Amy Ross, F.B.I. forensic analyst, frustrated by her trivial assignments and wanting more excitement. Next is electronics innovator David Rubens who is solitary and ignored. Fourth, psychologist Mira Charan whose books on criminal psychology are too revolutionary for peers or law enforcement, so she craves the chance to make a difference.Finally, ex-con Luis Diaz, trying to make ends meet and to the right thing when all he's good at is criminal work, and no-one wants give him legit work with his past. Batman can give them all what they desire.Sixteen hours previous. Doctor Fries checks his wife out of hospital, to care for her himself despite her doctor's recommendation. He takes her to his lab, and places her in his cryo machine. Fourteen days previous. Batman is briefing his team, giving them their roles and answering their questions. They haven't told him that they'll join, but he knows they have already decided. Twelve hours previous. Fries' machine is not working correctly. Someone switched to the weapon demos, and it's killing his wife. He aborts, but it may be too late. Ten days previous. Batman's team are progressing well, mastering the techniques he tells them of, and making a fine start. Eight hours previous. Mrs Fries is encased in a block of ice. Her husband despairs. He overloads the pressure of his machine, destroying it to commit suicide. Six days previous. The team begin active surveillance on Scotta. They're improving, and Batman watches approvingly. Scotta is trying to by something, and they retrieve animal tissue with deep cellular trauma. Four hours previous. Fries is hallucinating as the cryogenic process permeates his body. He sees an angelic version of his wife, imploring him to survive and take vengeance. Two days previous. Batman's team have a rendezvous. Batman wants them to take on a real challenge. Elsewhere. Zero. Fries wakes up among the wreckage of his lab, ready for revenge.

Retrieved from "https://heykidscomics.fandom.com/wiki/Batman:_Legends_of_the_Dark_Knight_Vol_1_193?oldid=1483999"
Community content is available under CC-BY-SA unless otherwise noted.