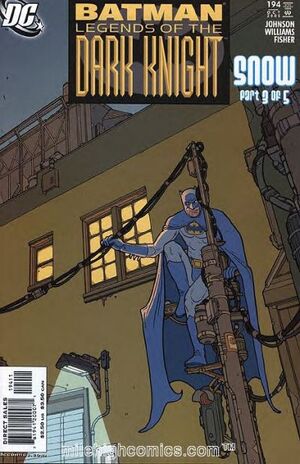 6:00 am. Batman and Gordon meet. Gordon says that Scotta's making a move tonight and gives Batman his file. Batman says he's been working on a side project the last few weeks. 6:35 am. Batman greets his team with the Scotta file and the news that the police are moving on him tonight. They've made some tracking devices, and are bonding well. Batman wants to deploy them that evening. 7:50 am. Bruce has been improving physically recently, and Alfred is gratefully. But with his team increasing his effectiveness, he doesn't want to slow down. 8:05 am. Doctor Fries wakes up in the remains of his lab, frozen and dripping ice. He finds his wife, still encased in ice and prepares to get his revenge. But his body is endothermic, drawing heat from whatever it touches, crumbling it to icy shards. His attention turns to the cryogenic suit. 8:40am. Fries is calling his team mates, telling them of an accident and asking them to meet him at the lab. 10:10 am. Fries' three team mates arrive and look through the wreckage. They find the wife, and missing equipment. They wonder if Fries knew he was being cut, and then he appears, announcing that Victor Fries is dead. 12:45 pm. Batman is briefing his team for the evening's operation when Gordon with news of an incident at Neodigm- Fries' lab. He thinks it's a homicide, but he can't tell how many casualties among the icy mess. 1:20 pm. Fries is talking to the spirit of his wife, saying that he destroyed the other men who made the project, took the gun and obliterated the files. The spirit says that his boss still might have files and backups. Fries agrees to remove him as well. 2:00 pm. Batman gives his team an extra assignment, to gather evidence from Neodigm while Batman talks to Gordon. They achieve their goals with minimum notice taken. 7:00 pm. The team report in. Neodigm's cryogenic process killed everyone, while the hardware was deliberately exploded, and Fries, the leader, is missing, as is his wife. The boss said Fries was considered for the next round of layoffs. They believe it was a weapons system, and Charan speculates that Fries may have murdered his tea mates after an unsuccessful attempt to heal his wife. They return to planning the night's op. 8:50 pm. Both the police and Batman's team are in position. But there's a complication with Scotta's deal, as Fries' boss Parke turns up to explain. Batman's boys in the van attract the attention of the cops, and van Daalen acts too quickly to abort, dissolving both operations and getting Ross shot by Scotta's men. 9:20 pm. The police arrest Scotta and his men for firearm offences. Back at their base, Ross is found to have only be grazed and the others begin to despair. Fries looks on, and decides to take care of the people Parke told about the weapon. 11:15 pm. Gordon rips into Batman about the failure of the stakeout, and threatens to arrest him next time he sees him.

Retrieved from "https://heykidscomics.fandom.com/wiki/Batman:_Legends_of_the_Dark_Knight_Vol_1_194?oldid=1484000"
Community content is available under CC-BY-SA unless otherwise noted.