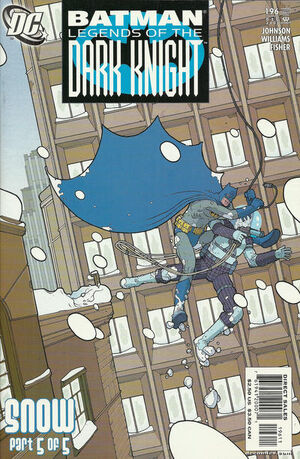 Fries is building something to finish everyone who knew of his device. It's a lot simpler than they suspected. At Wayne Manor, Bruce admits that Alfred ws right; he had been overstetching everyone. Even though he can't promise it won't happen again, alfred accepts his apology. Elsewhere, Rubens has nearly finished a new tracker control unit, Diaz is willing to return "for the team", and Ross is fascinated by the cryonic process. It starts to snow, as Fries hallucinates his wife telling him he's nearly done.In the Batcave, Batman decides he needs an all-terrain car, but skis will do in the meantime. Gordon is travelling by bulldozer when Fries appears, encasing the wheels in ice. Batman's team have left to find van Daalen, and left Batman a covering that should temporarily resist the cryonic process. When the cops start looking for Gordon, Fries catches them, and warns them to stop everything they're doing. Batman jumps him, and the cover protects him, though it's damaged in the process. He smashes Fries' helmet and Fries escapes in the rush of escaping gas. Gordon has managed to extricate himself and asks to patch things up with Batman when it's over. Elsewhere, the team find van Daalen's remains and Mrs Fries' shattered ice block. THey also find the device used to cover to city in snow. Before they can disable it, Fries appears and freezes Charan's arm. Batman arrives in time to save her, confusing Fries to the piont where he jumps into the river. One week later. Charan is out of hospital and the team decide to go on without Batman. He's already taken the communication equipment he had set up. At Wayne Manor, Bruce decides that he needs an assitant. he takes the morning off, for once, and reads the paper, which features an article on the Flying Graysons.

Retrieved from "https://heykidscomics.fandom.com/wiki/Batman:_Legends_of_the_Dark_Knight_Vol_1_196?oldid=1484002"
Community content is available under CC-BY-SA unless otherwise noted.