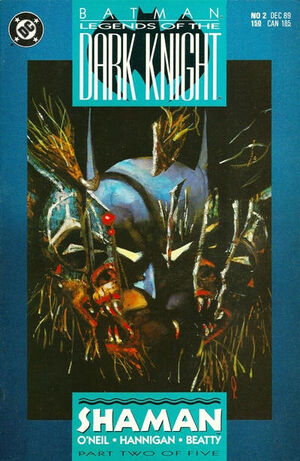 I do believe you've splashed Sulfuric acid on the Chippendale table. Personally, I prefer to use Lemon Pledge. Ah, well, what's a priceless antique in the pursuit of science?

Two Gotham City police officers Al Kelly and Jimmy Fong stumble upon the Chubala Cult in the middle of a human sacrifice. Kelly is killed and Fong barely escapes with his life. Captain James Gordon arrives on the scene, but the cult members have long since fled. Bruce Wayne arrives at the crime scene, and Gordon summarizes the recent events.

Bruce recalls the name "Chubala". It was the last word spoken by Tina Wilson shortly before she took her own life. He decides to investigate further to see what the connection is.

That night, Bruce changes into Batman and tracks down several of the Chubala cultists. The cultists are on the rooftop of Gotham Central Hospital with the intent of finishing off officer Fong. Batman quickly apprehends them and leaves them bound to a streetlamp for the police.

Later, Bruce Wayne and Alfred Pennyworth explore the caverns beneath Wayne Manor. Bruce decides that this spacious cavern will make an ideal base of operations. Moments later, he receives a phone call from Bennet Young. Bennet is urgent to meet with him.

When he arrives at the Gotham Arms Hotel, he finds Bennet Young with a spear sticking out of his chest. His dying words are "Baat... Man..."

Retrieved from "https://heykidscomics.fandom.com/wiki/Batman:_Legends_of_the_Dark_Knight_Vol_1_2?oldid=1509557"
Community content is available under CC-BY-SA unless otherwise noted.