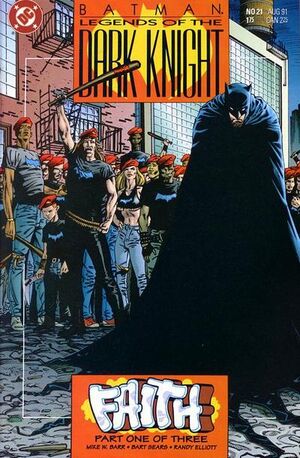 That's what we're for -- when the law doesn't work.

John Ackers wanders the street strung out on drugs. He bumps into Mister Costas and his thugs who begin beating him for drooling on their car. Batman rescues Ackers and brings him to a hospital where he is treated by Leslie Thompkins. Leslie leaves the hospital to have dinner with Bruce Wayne, assuming Ackers will be gone by the time she returns. At dinner, Leslie recalls with Bruce their first meeting and discusses how his life could have taken a different turn. When Leslie returns to the hospital, Ackers is still in the hospital and inspired by Batman he vows to do something better with his life.

When Ackers leaves the hospital, he decides to start doing good in the name of Batman. He goes to a place where he knows someone will need help a bus stop. As Billy exits the bus he is approached by two thugs who try to get him hooked on drugs, Ackers attacks the thugs and offers Billy a chance to join him. Ackers group begins to grow and their first skirmish is protecting a local grocers. The grocer gives Ackers and his group a run-down building to stay in if they fix it up.

Ackers attempts to pay back Dr. Thompkins for her help, but she refuses because she disagrees with his violent methods of handing out justice. Captain Gordon calls Ackers to his office to discuss his tactics with "The Batmen." He advises Ackers to stop, but Ackers refuses unless Batman is given the same treatment. Gordon is left to contemplate.

The Batmen get word that one of Costas' men (Twitch) is coming back. Batman is also aware of this and they both head to the abandoned building where Twitch is picking up his pay. However, it was a trap which is sprung when Costas' men start firing at the building killing Twitch. A battle between the Batmen and Batman versus Costas men ensues. The drug dealers lose and Batman speaks to Ackers saying he approves of what he's doing. However, Ackers wrongfully assumes that Batman has tasked him with killing Costas.

Retrieved from "https://heykidscomics.fandom.com/wiki/Batman:_Legends_of_the_Dark_Knight_Vol_1_21?oldid=1411380"
Community content is available under CC-BY-SA unless otherwise noted.