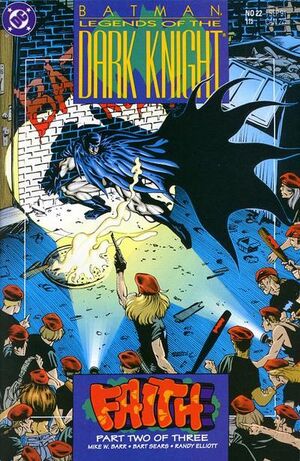 Bruce and Leslie are at Leslie's apartment observing a riot between the Batmen and some drug dealers. Bullets fly through Leslie's window. The riot is broken up by the police who arrest both the criminals and the Batmen. Leslie leaves to go to the hospital, while Bruce heads to have a conversation with Captain Gordon.

Gordon warns Batman that the police are going after the drug dealer Costas. He tells Batman to stay out of their way. Batman then heads to the headquarters of the Batmen to warn their leader John Ackers to also stay away. However, while dreaming Ackers has been receiving orders from a perceived deity to kill Mr. Costas, which leads Ackers to gather some of his best men and head to Costas' mansion.

At Mr. Costas' mansion, the police attempt to arrest Costas, but a firefight breaks out. Batman helps the police take the mansion, even at the risk of being shot at by both sides. Inside, Costas' men betray him and shoot him in the shoulder. They attempt to turn him over to the police in exchange for their lives. Costas escapes in a car, but is pursued by Batman. Batman pulls him out of the car and leaves him for the police.

Back at the hospital, Costas is recovering from his injuries. He is under police protection when Batman arrives to question him. Leslie Thompkins is the attending physician and is caught in the middle. At the same time, Ackers' Batmen arrive and begin making their way to Costas' room to kill him. Batman attempts to stop them, but is shot in the back by Ackers. As Batman lay wounded on the floor, Leslie attempts to help him and uncovers his identity as Bruce Wayne.

This issue provides an interpretation of the first time Leslie Thompkins learns of Batman's true identity. It is unknown if this is the actual first published story in which she learns Bruce's secret.

Retrieved from "https://heykidscomics.fandom.com/wiki/Batman:_Legends_of_the_Dark_Knight_Vol_1_22?oldid=1411381"
Community content is available under CC-BY-SA unless otherwise noted.