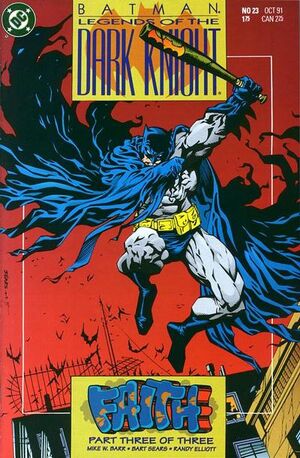 After Leslie Thompkins removes the bullets from Batman's back, he heads to the headquarters of the Batmen. There Ackers is holding Costas and is experiencing intense frustration at the fact that Costas doesn't remember having his men beat Ackers up.

Batman sneaks into the headquarters and attempts to make his way towards Costas. He is found by Billy who covers for him and actually helps change Batman's bandages. Ackers calls a group meeting, leaving Batman alone while everyone else attends the meeting.

At the meeting, Costas is brought to Ackers in a cage, who intends to murder Costas in front of his men. As he's about to deliver a killing blow, Batman bursts through an air duct. Ackers hits Batman, incapacitating him. He then finishes off Costas delivering the killing blow.

Batman then challenges Ackers to a one-on-one fight. Ackers shoots him six times, but Batman is unphased. He then knocks Ackers out and tells everyone else to leave. Billy figures out that Batman filled Ackers gun with blanks earlier. Batman delivers Ackers to Gordon, along with a message that Ackers is a murderer to share with the rest of the neighborhood.

At Wayne Manor, Alfred is attempting to patch Bruce up when Leslie appears. She takes over and apologizes for not raising him better. Bruce assures her the he is the product of his own decisions and that he might not be happy, but he is content. He also has a moment of reflection thinking how nice it was to work with Billy. The action then flashes to the Flying Grayson's trailer where young Dick Grayson is marveling at a comic book of the Batman.

Retrieved from "https://heykidscomics.fandom.com/wiki/Batman:_Legends_of_the_Dark_Knight_Vol_1_23?oldid=1411382"
Community content is available under CC-BY-SA unless otherwise noted.