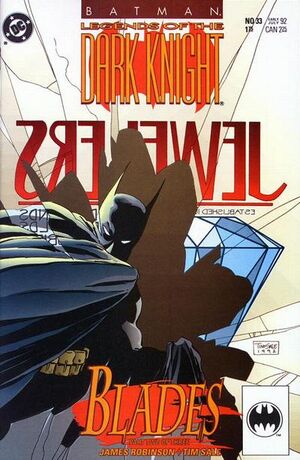 Until next time... Batman. Adieu!

The Cavalier poses as a hero, but is actually a thief working for Randolph Salt. After stealing several expensive items, his true identity is discovered by Batman. Batman tries chasing him down in his Whirly-Bat, but the Cavalier throws a knife at it, forcing it to the ground. Batman is injured, and the Cavalier uses the opportunity to escape.

Retrieved from "https://heykidscomics.fandom.com/wiki/Batman:_Legends_of_the_Dark_Knight_Vol_1_33?oldid=1504543"
Community content is available under CC-BY-SA unless otherwise noted.