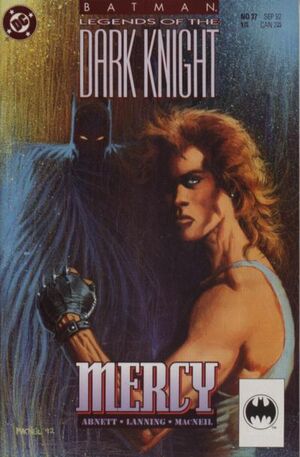 This is a story about Mercy. It's also about revenge... justice... and fighting for yourself.

Gotham City police officers attempt to arrest a burly, sadistic street fighter known as the Cossack. The brutal Cossack kills most of the, including the partner of one Mercedes Stone. Stone herself, nearly loses her life. Batman takes an interest in Mercy's life and understands her desire for revenge. He takes it upon himself to train her. After several months of training under Batman, Mercy decides to hunt down the Cossack on her own. This results in her joining the underworld fight circle. Using the fighting techniques that Batman taught her, she accidentally kills another fighter. She eventually tracks down the Cossack and challenges him to a match. Although Mercy is strong, she cannot take on the Cossack. Batman arrives at the Blood Pit just as Mercy is being mercilessly beaten. He intervenes, but he is too late. Although he defeats the Cossack, the battle has cost Mercy her life. Batman takes his winnings and donates them to the family of the fighter that she killed.

Retrieved from "https://heykidscomics.fandom.com/wiki/Batman:_Legends_of_the_Dark_Knight_Vol_1_37?oldid=1411396"
Community content is available under CC-BY-SA unless otherwise noted.