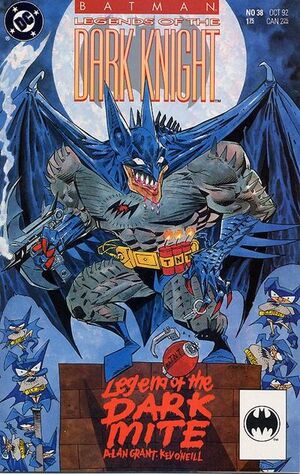 You've been very naughty. I want you to go back and give yourself up to Batman...!

Appearing in "Legend of the Dark Mite"Edit

Synopsis for "Legend of the Dark Mite"Edit

Batman interrogates insane drug user Bob Overdog at Arkham Asylum. Overdog pleads innocent of killing his confederates, blaming the incident on a diminutive elf called Bat-Mite. Batman disbelieves his story, suspecting that everything Overdog claims to have seen was nothing more than the effects of abundant drug use.

Retrieved from "https://heykidscomics.fandom.com/wiki/Batman:_Legends_of_the_Dark_Knight_Vol_1_38?oldid=1411397"
Community content is available under CC-BY-SA unless otherwise noted.