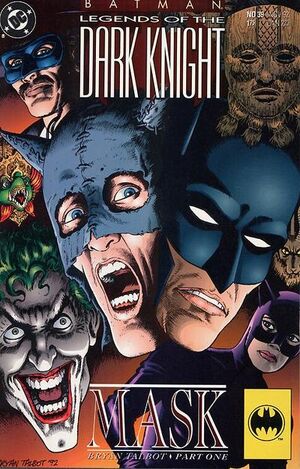 I am the Batman. This is my city. At night it belongs to me.

Appearing in "Mask (Part I of II)"Edit

Synopsis for "Mask (Part I of II)"Edit

Batman busts up a gang of petty thieves, but after handing them over to the police, falls violently ill. He awakens out of costume inside Arkham Asylum. The doctors try to keep him under control, but they are convinced that he is just a vagrant alcoholic. A psychiatrist named Mike Clayton visits and tells Bruce that his dual identity as Batman is just a side-effect of hysterical dissociative disorder. Bruce doesn't believe him, and believes that he is actually the Joker in disguise. On a later visit, Mike Clayton appears to him as Two-Face. He then sees visions of Catwoman inside his room. Having had enough of this, he crawls out of bed, pulls on his costume and leaps out the window. In mid-fall, he realizes that the costume he is wearing is not his traditional attire, but rather, a crudely made outfit of cheap plastic bags and rubber boots. The seemingly insane Bruce Wayne continues to plunge to his doom.

Retrieved from "https://heykidscomics.fandom.com/wiki/Batman:_Legends_of_the_Dark_Knight_Vol_1_39?oldid=1411398"
Community content is available under CC-BY-SA unless otherwise noted.