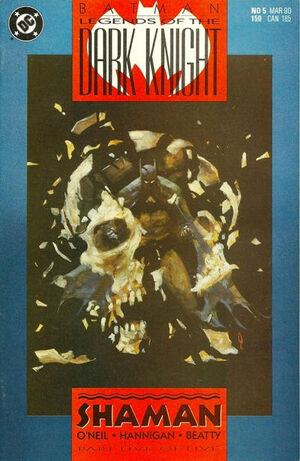 I've got to go back downtown. I may finally put an end to the ritual murders tonight.

Bruce Wayne approaches the front door of Wayne Manor. Just inside the door, awaits the knife-wielding Shaman, ready to stab Wayne when he enters. Behind the Shaman is Alfred Pennyworth, gagged and tied to a chair. The Shaman begins to get restless from waiting and Wayne leaps upon him from the second floor of the house's interior. In the ensuing fight, Wayne is stabbed. Wayne successfully wrests the knife from the Shaman's grasp, but the Shaman runs away. Wounded, Wayne cannot follow. However, he has put a tracer in the Shaman's robes and now he follows it. Batman appears in the midst of a sacrifice, and belittles and shames the Shaman in front of his men, so they will not follow him any longer. Batman ties up and leaves the Shaman for the police.

Retrieved from "https://heykidscomics.fandom.com/wiki/Batman:_Legends_of_the_Dark_Knight_Vol_1_5?oldid=1411364"
Community content is available under CC-BY-SA unless otherwise noted.