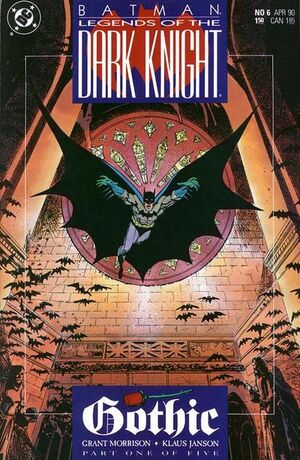 Gotham City is Hell. We are all in Hell. And I am the King of Hell.

Appearing in "Gothic: A Romance, Volume One: Man Without a Shadow"Edit

Synopsis for "Gothic: A Romance, Volume One: Man Without a Shadow"Edit

In a warehouse, two men torture a third, hanging by his feet a the end of a rope, to determine the whereabouts of a missing shipment of drugs. The second man hands the first some lighter fluid and as the first begins dousing their captive with it, they hear music. The second man goes to check it out as the first threatens his captive. After a minute or so, when his compatriot has not returned, the first torturer goes in search of him and finds a record player. While he is distracted another man kills him. This man then goes to the captive, strikes a match, lights a cigarette and sets the man ablaze.

Two people are killed when the elevator they enter falls down the shaft. A mobster named Jack Kane is on the phone and tells another criminal, by the name Ottavio, that Mr. Whisper has returned and is killing members of the mob. Mr. Whisper appears and kills Kane.

Batman foils a mugging, while across town Mr. Grazzano is killed in an opera house by a bomb in a box of chocolates.

Members of the mob gather atop a building, where they decide they need help against Mr. Whisper. They activate the Bat-Signal, calling Batman.

Retrieved from "https://heykidscomics.fandom.com/wiki/Batman:_Legends_of_the_Dark_Knight_Vol_1_6?oldid=1411365"
Community content is available under CC-BY-SA unless otherwise noted.