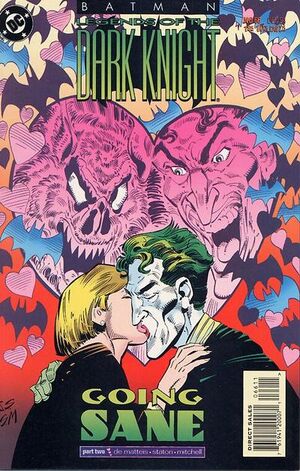 Why won't you leave me alone--both of you? I hate you! I hate you! Bat-wings, clown-face--pushing me down/cutting me up/can't stay afloat/can't catch my breath! Oh, God, it hurts! Oh, God, I'm drowning!

Three weeks have passed since the Joker kidnapped Councilwoman Elizabeth Kenner. Jim Gordon is in his office watching the news. Reports of a brutally beaten and strangled body being fished out of Gotham Bay are followed by Kenner making comments about Captain Gordon, taking him to task about not apprehending the Joker as well as the unknown fate of Batman. While looking at a picture of Joker on the Batcomputer, Alfred also wonders if indeed Joker killed him.

Joker has been living in an apartment in Park Ridge, the very same sight of his bombing, since his last encounter with Batman. He has deluded himself into inventing a generic name for himself, Joseph Kerr, and that he just moved to Gotham City from someplace he cannot seem to remember. He has himself believe that he just lost his parents, his apartment paid for by an inheritance from their deaths, supposedly has a job working for an accounting firm, and is taking medication for his skin condition, living life as an average every day guy. He immediately bumps into a pretty young woman from across the hall named Rebecca Brown and the two are instantly attracted to one another.

Weeks pass and Alfred still wonders if indeed Batman is dead, while Gordon continues to hear Kenner's harsh comments towards him and Batman's fate as well as keeping the faith by having the Bat Signal lit. Joseph and Rebecca have become a happy couple who enjoy the same things such as old comedic reels and radio shows from the 1930's and 1940's. However, kinks start to appear in the sanity of Joseph as he suffers from horrible nightmares and comes across various links to his former life as Joker.

The body in the bay is identified as Dr. Elias Bruckner; a plastic surgeon who specialized in new faces for criminals. His being seen for the last time with the Joker right after the Comedia Theater was destroyed further fuels rumors of Joker still being at large in the city as well as Batman being dead. On the television news, tension between Gordon and Kenner become white hot, while Alfred tries his best to tend to the manor. Jospeh is watching this same newscast which causes him to become angry, almost hitting Rebecca in the process. He is able to stop himself from going through with it but runs out of the apartment and into the elevator, giving in a little to his former persona. Gordon finally turns off the Bat Signal one night.

More weeks pass and Rebecca wakes up to a room of flowers and a happy Joseph, who proposes marriage to her. An ecstatic Rebecca accepts his proposal. Unable to sleep Alfred descends down into the cave when suddenly a familiar voice calls his name. He turns to see Batman who proclaims his return.

Retrieved from "https://heykidscomics.fandom.com/wiki/Batman:_Legends_of_the_Dark_Knight_Vol_1_66?oldid=1572632"
Community content is available under CC-BY-SA unless otherwise noted.