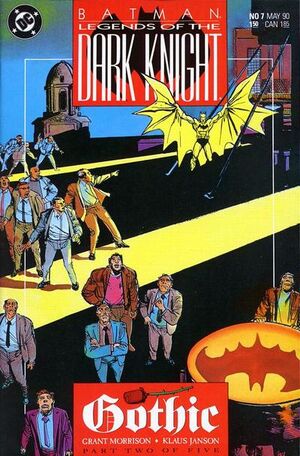 Clean? You can never be clean. Drugs. Prostitution. Protection. Corruption. Assassination. This city is sick. Its people are sick with fear. Now you know what that feels like. You and your kind have turned Gotham City into a Hell. Now rot in it.

Appearing in "Gothic: A Romance, Volume Two: The Death Ship"Edit

Synopsis for "Gothic: A Romance, Volume Two: The Death Ship"Edit

Batman appears on the rooftop and meets with the mob members. They tell him how twenty years ago they killed Mr. Whisper and now he has returned and is killing them one by one. They propose that Batman help them find Mr. Whisper and in return they will cease all criminal activity until he is found. Batman tells them no deal and leaves. Mr. Whisper appears in Ottavio's penthouse, ready to kill him, and Batman crashes in through the window. Whisper flees. Batman takes off after Whisper and Ottavio realizes that Whisper has already killed him with poisoned wine. Whisper knocks Batman off the roof, and using a bat-rope, he swings back up onto the roof, where he in turn knocks Whisper off the roof. As Whisper falls, Batman realizes that he knows Whisper from somewhere. Whisper is Mr. Winchester, the headmaster at a private school that Bruce Wayne attended.

Retrieved from "https://heykidscomics.fandom.com/wiki/Batman:_Legends_of_the_Dark_Knight_Vol_1_7?oldid=1411366"
Community content is available under CC-BY-SA unless otherwise noted.