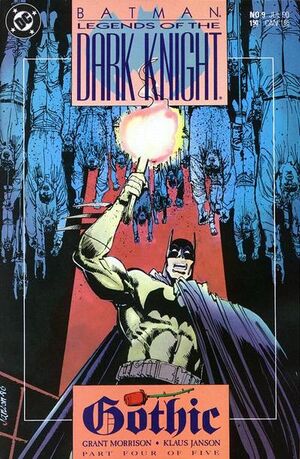 I remember the headlines. That's what changed you, wasn't it? That's when you were plunged into the darkness. You're still little more than a brutalized child for whom the world is all shadows and fear. I pity you. I suppose it's a kind of Hell. But don't worry. I will deliver you.

Appearing in "Gothic: A Romance, Volume Four: The Hangman's Tale"Edit

Synopsis for "Gothic: A Romance, Volume Four: The Hangman's Tale"Edit

A criminal named Hooper holds a gun to a boy's head in a building that the police have surrounded. They call for him to release the boy and surrender. Batman arrives, saves the boy and knocks Hooper unconscious, leaving him for the police. Batman goes to see a mobster named Morgenstern, who tells the Dark Detective about the night the mobsters killed Mr. Whisper. Batman returns to the Batcave and following clues, determines Mr. Whisper is in the industrial district. He goes there, to a warehouse, where he finds several bodies. He and Whisper face off. Whisper captures Batman and ties him down. He then lights a candle and tells Batman that when the candle goes out, a vial will release plague into the air, killing him. Then Whisper leaves.

Retrieved from "https://heykidscomics.fandom.com/wiki/Batman:_Legends_of_the_Dark_Knight_Vol_1_9?oldid=1411368"
Community content is available under CC-BY-SA unless otherwise noted.