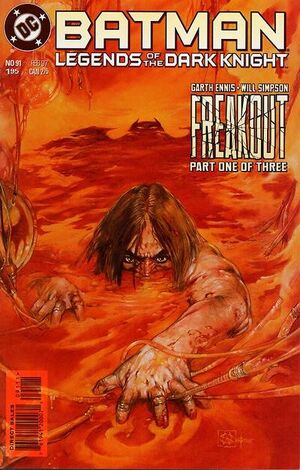 A man named Carson walks into a drug house and shoots eight criminals. Across town, Batman breaks up a mugging, hears the shots at the drug house and heads that way. Back at the drug house, the man's female partner, Oakley, is now in the house, shooting more of the criminals. She uses a taser on one of them and Batman arrives and takes down the rest of the criminals. He begins arguing with Carson, when a call comes in to the house. Carson seems to recognize the voice on the answering machine. The police arrive and everyone goes to the station house.


Once there, James Gordon tells Batman that Carson and Oakley are private investigators from New York, hired to bring home Sean McClusky. McClusky is arrested for drug charges and Carson and Oakley are told to leave town. Somewhere in Gotham City a long haired man pulls himself out of a swimming pool filled with blood, or is it a swimming pool he perceives to be full of blood? This man, known as Doctor Freak, is high on his own drug, LSD 2000.

Retrieved from "https://heykidscomics.fandom.com/wiki/Batman:_Legends_of_the_Dark_Knight_Vol_1_91?oldid=1411449"
Community content is available under CC-BY-SA unless otherwise noted.