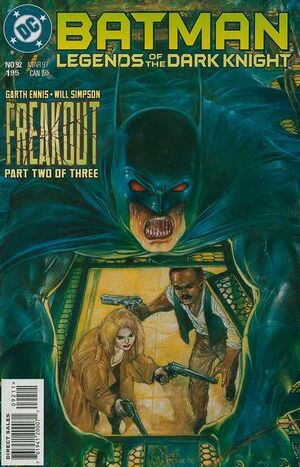 Batman tells Alfred Pennyworth that someone is peddling a new kind of acid on the streets of Gotham City. Batman is considering taking some of the drug to help with his investigation. Carson awakes from a nightmare, which was really a wartime memory in which he and Freeker, the man now calling himself Dr. Freak, were in the same military squad. Batman tracks down Dr. Freak's lair and begins a frontal assault. Batman confronts Doctor Freak in a room in which multiple bodies are hanging from the ceiling, dripping blood into a vat of LSD 2000. Batman begins crossing a catwalk to get to Freak and the catwalk gives way. Batman falls into the vat. He crawls out of the vat and the warehouse, where Oakley and Carson stand, seeing Batman reacting badly to the drug.

Retrieved from "https://heykidscomics.fandom.com/wiki/Batman:_Legends_of_the_Dark_Knight_Vol_1_92?oldid=1411450"
Community content is available under CC-BY-SA unless otherwise noted.