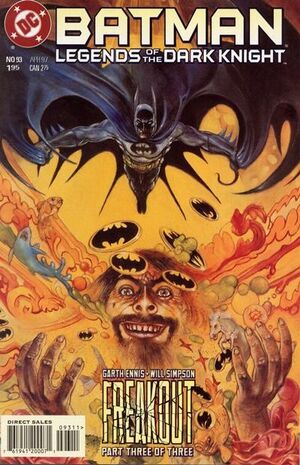 If I ever see you in this city again, God help you.

Bruce Wayne awakes in his bed in Wayne Manor. He has recuperated from the effects of the LSD 2000. Batman stops a supply truck full of LSD 2000 and braces one of the thugs for information about Doctor Freak. James Gordon tells Batman that SWAT is about to rush Freak's hideout. Carson and Oakley use the distraction to enter the building. The private detectives see Freak take off in a plane from the roof of the building. They commander a SWAT helicopter and follow. When Freak touches down, Batman is waiting for him. Oakley holds a gun on Batman and tells her partner to do what he has to. Carson pulls a gun and points it at Freak's head. Batman releases gas from his utility belt and Oakley passes out. Batman throws a Batarang at Carson, knocking his gun to the side just as it fires, creasing Freak's skull, but not killing him. Freak is taken into custody and becomes a resident at Arkham Asylum. Oakley and Carson are told to leave Gotham City and never return.

Retrieved from "https://heykidscomics.fandom.com/wiki/Batman:_Legends_of_the_Dark_Knight_Vol_1_93?oldid=1411451"
Community content is available under CC-BY-SA unless otherwise noted.