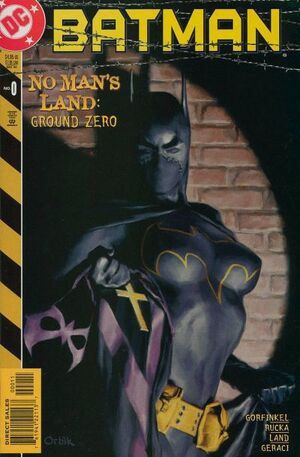 Whatever the case, I won't stop until I have rescued Gotham City.

Bruce Wayne is having trouble coming to grips with the No Man's Land syndrome. He goes to Monaco to play up his playboy reputation, but finds little satisfaction in how things are preceding. He hates playing the role of Bruce Wayne.

The Huntress meanwhile tries to maintain law and order in the impoverished Gotham streets. The locals do not fear her in the same way that they fear Batman however. To compensate for this, the Huntress tries out a new tactic. She dons a new costume and assumes the guise of Batgirl!

Bruce eventually returns and realizes that he can no longer sit idly by and do nothing. He patrols the streets of Gotham and finds the new Batgirl. He immediately recognizes her as the Huntress, but there is little to criticize her - a new adversary has entered the mix, Ferak.

Ferak is a living plant woman, possibly one of Posion Ivy's creations (as Batman surmises). Batman decides to let Huntress take lead on this to see how well she fares. He's concerned that she may go over the line, in which case, Batman is ready to stop her. The Huntress calms Ferak down, realizing that she is just a confused creature. She leads her to Robinson Park where she can be with other plants. Batman is impressed. No longer concerned about the Huntress' motives, Batman swings off to save Gotham.

Retrieved from "https://heykidscomics.fandom.com/wiki/Batman:_No_Man%27s_Land_Vol_1_0?oldid=1510148"
Community content is available under CC-BY-SA unless otherwise noted.