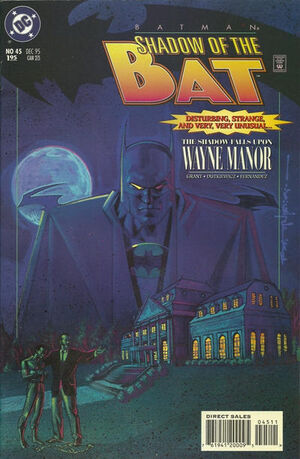 I will risk my name and reputation to help you -- but I swear I will strangle yu with these bare hands should you try to leave this place! The Underground Railroad has helped hundreds like you to freedom. If you return, your owners will torture you to discover who helped you, and where they might be found.

Appearing in "Wayne Manor: Anatomy of a Murder"Edit

Synopsis for "Wayne Manor: Anatomy of a Murder"Edit

Retrieved from "https://heykidscomics.fandom.com/wiki/Batman:_Shadow_of_the_Bat_Vol_1_45?oldid=1717871"
Community content is available under CC-BY-SA unless otherwise noted.