Start a Wiki
Part of the 'Batman: The House of Hush' event 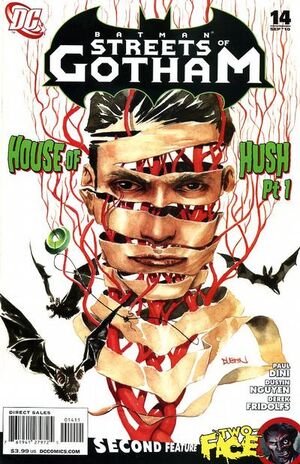 Appearing in "The House of Hush, Prelude"Edit

Synopsis for "The House of Hush, Prelude"Edit

Two-Face sits at the head of a long table in the back of a restaurant. Surrounded by his men, most of them uneasy of what is going on. Two-Face has brought his gang together as the first step in his plan to take back Gotham following the capture of the Black Mask. As always, Harvey anxiously flips his coin answering questions that are only in his head, while waiting for some other men to show up. Suddenly, the power is cut and the men are left sitting in the dark. When the back-up generators kick-in and the lights return, a bloodied man, bound and gagged, has appeared on the table in front of them. Two-Face removes the gag, but the man is too hysterical to make any sense. Batman decides then to interject. He lets Harvey know that his men have been taken out, as well as his properties and other assets. Two-Face has a snitch in his midst who is giving information to the FBI Batman attempts to offer Two-Face an easier way out, but turning himself in to the GCPD but before he can answer, the doors and windows are smashed in. The FBI orders all men to put their faces down and their hands behind their heads, including Batman. Despite Batman's insistence that he has everything under control the agent in charge blows him off and heads straight for Two-Face. Harvey enjoys the fact that Batman is being treated the same as him. When told to stand, Harvey of course turns to his coin to decide his next move. His men begin leveling guns at the federal agents as well and before Harvey can finish flipping his coin, all hell breaks loose. In the fray, Two-Face manages to get a hold of the federal agent and a stand-off between he and Batman ensues. Not wanting to allow any more bloodshed, Batman apparently lets Two-Face go.

Four hours later, Harvey has let the federal agent live. Leaving him behind at the restaurant, he heads to a rendezvous with Mario Falcone and his men on the premise that the Falcones are going to help out and lend a hand. Once the Falcones arrive, armed to the teeth, it is apparent that they have no intention of helping Two-Face. The men begin opening fire, and Harvey ducks behind cover all the while carrying on a conversation with Mario. As Two-Face flips his coin to decide his next move, Mario fires a shot that catches the coin in midair. When Harvey retrieves the coin it has now been scarred on both sides, leaving him without an answer. Panicked without his choice clear, Two-Face takes a moment and decides to blow through his own men. Chester, the last of his own men Two-Face shoots on his way out, expresses his disgust at Harvey for shooting him. He pulls out a bloodied cell phone and drags himself painstakingly through the open doorway nearby. On the phone, he reveals himself as Special Agent Chester MacDonald and requests back-up. Almost immediately he realizes he is not alone and Two-Face reveals himself to be standing just across the doorway from Chester. Two more of Two-Face's men make it out the door. Now realizing that Chester was the snitch all along, they grab him and take off.

Retrieved from "https://heykidscomics.fandom.com/wiki/Batman:_Streets_of_Gotham_Vol_1_14?oldid=1661782"
Community content is available under CC-BY-SA unless otherwise noted.