Part of the 'Batman: Leviathan' event 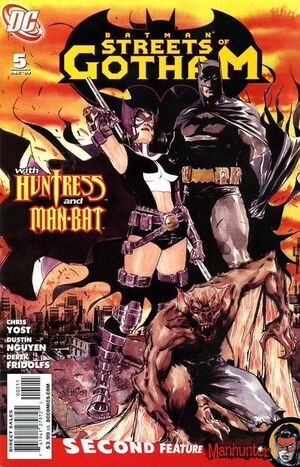 Appearing in "Leviathan, Part 1 of 2"Edit

Synopsis for "Leviathan, Part 1 of 2"Edit

Synopsis for "Your Move, Sweetheart"Edit

Kate Spencer is enjoying some time in Los Angeles with her son, Ramsey, and an old friend, Damon Matthews before being called back to Gotham City by Harvey Bulloch. Twelve hours earlier, Dylan Battles, an old acquaintance of Kate’s, recounts his former life to a bartender at a place called the “Rogues’ Gallery and Pub”; while around him lay patrons of the bar, all dead. A few minutes later, after Two-Face enters the pub and kills the bartender, Dylan and Dent leave. When she arrives back in Gotham, Kate is called to the pub crime scene where she is shown a scrawled message left for her by Two-Face.

Retrieved from "https://heykidscomics.fandom.com/wiki/Batman:_Streets_of_Gotham_Vol_1_5?oldid=1661773"
Community content is available under CC-BY-SA unless otherwise noted.