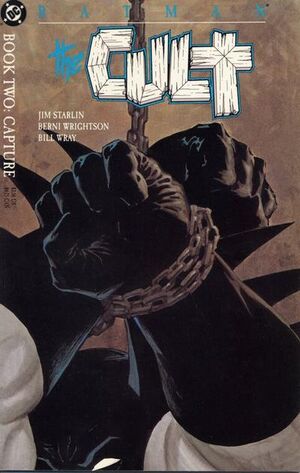 Batman shrugs off Deacon Blackfire's drug treatment and returns to the sewer lair to confront him. Batman is taken prisoner by the Deacon's men who realize that they cannot break his will. The Deacon orders Batman to be taken to the bathing room and killed. Batman breaks away from them and dives beneath the sewers. Robin tracks him down and finds Batman sitting atop of a mound of corpses.

Retrieved from "https://heykidscomics.fandom.com/wiki/Batman:_The_Cult_Vol_1_2?oldid=1413621"
Community content is available under CC-BY-SA unless otherwise noted.