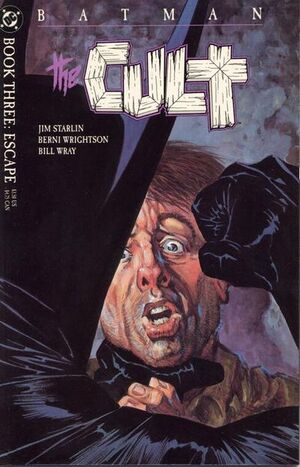 Robin helps Batman escape the sewers. Batman is still shaken by his experience and has difficultly fighting. Robin asks him for help and Batman snaps out of it. Deacon Blackfire's army of homeless force the National Guard to withdraw and the Governor recommends Gotham City evacuate but about half the people remain. Sewer snipers eliminate a spec ops group sent in and barricades keep the army at bay. Once they leave the sewer, Batman asks Robin to phone Alfred and get him to pick them up. Batman tells the stunned Boy Wonder that they are leaving Gotham and not coming back because Blackfire has won.

Retrieved from "https://heykidscomics.fandom.com/wiki/Batman:_The_Cult_Vol_1_3?oldid=1413622"
Community content is available under CC-BY-SA unless otherwise noted.