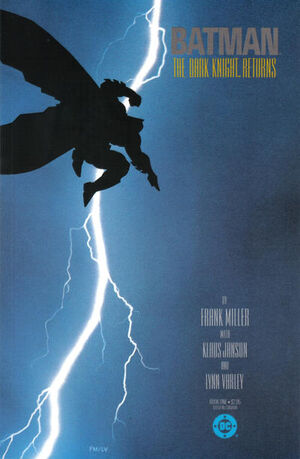 You've got rights. Lots of rights. Sometimes I count them just to make myself feel crazy.

Appearing in "The Dark Knight Returns"Edit

Synopsis for "The Dark Knight Returns"Edit

The book is thought to be set during the Cold War, but the intro mentions it being 20 years in the future. It is a dark, depressing world where criminals run amok in the absence of superheroes. Gotham City is terrorized by a gang of vicious and aimless teenage murderers, the Mutants. A now 55-year-old Bruce Wayne has been retired for ten years following the death of the second Robin, Jason Todd (murdered by the Joker). Attempting to bury his guilt over Jason's death, Wayne has turned to alcoholism, near-suicidal recreational activities, and has funded the rehabilitation of Two-Face in an attempt to prove to the world - and to himself - that a man's demons can be truly exorcised. On the eve of Commissioner Gordon's forced retirement, however, two events push Wayne to reestablish the presence of his alter ego: a major crime wave hits the city, and Two-Face's rehabilitation goes awry. An enormous bat crashes through the windows of Wayne Manor, symbolizing the psychological return.

Re-donning the cape and cowl, Batman must deal with a world where even the petty criminals are homicidal maniacs who kill for thrills. He no longer has the absolute support of the police, public, or government. Miller's interpretation of Gotham (and of America) is a place of deep moral ambiguity. Reporters and psychologists see the Joker as a victim and Batman as the madman. The new Police Commissioner is upstanding, capable, and smart, a fitting replacement for Gordon - yet she has no love for the Batman, and hunts him ruthlessly. Even Superman himself has been twisted into a covert agent for America's Cold War agenda, putting his loyalty to the American government above his fight for the American Way. Batman spends no time fretting over these ambiguities; instead, he seeks to impose his stark black-and-white view on a world of relativism. DKR deals in large part with Wayne's uncompromising obsession with his dual identity, in opposition to a world where duality has gone by the wayside. In this bleak landscape, Batman's obsessions and demons finally, completely, submerge Bruce Wayne, and the Dark Knight is given free rein to wage his war without inhibition.

In DKR, Batman has changed since he last put on the cape: though still quite strong and up to the physical task of apprehending ordinary criminals, Wayne is forced to acknowledge to himself that his advanced age and long period of inactivity have diminished both his skills and his ability to withstand and recover from injury. And, unknown to anyone, the Joker has likewise emerged from retirement. Catatonic (and without his trademark evil grin) in Arkham Asylum for the ten years of Batman's absence, the Clown Prince of Crime reawakens to his twisted, hateful obsession of the Dark Knight, upon hearing a television report about Batman's return.

Much of the story takes place on a television screen where journalists, experts, politicians and the public debate the rights and wrongs of Batman's methods and influence: some like Lana Lang praise him for reclaiming the streets from the criminals, while others criticize him for not observing the civil rights of these same criminals.

The issue culminates with an out-of-control, nearly suicidal Two-Face threatening to blow up Gotham's Twin Towers; however Batman is able to deduce and foil the scheme. In their struggle, Batman removes the bandages that have been covering Dent's face, expecting to find Two-Face's visage split in its classic dichotomy. Instead, he sees Dent whole and handsome on the outside, but fully lost within his own mind. In Dent, Batman sees a "reflection": just as the restoration of Harvey's face led to the final destruction of his sanity, the Batman persona has become all the stronger for having lain hidden under Bruce Wayne for a decade.

Retrieved from "https://heykidscomics.fandom.com/wiki/Batman:_The_Dark_Knight_Returns_Vol_1_1?oldid=1517963"
Community content is available under CC-BY-SA unless otherwise noted.