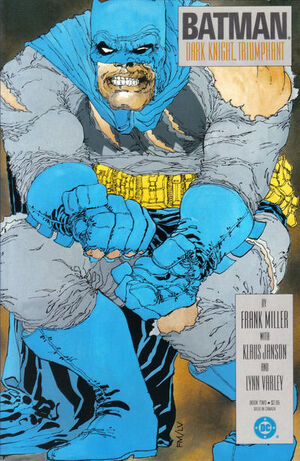 The second part chronicles Batman's struggle against Gotham's newest criminal threat, the vicious Mutant gang and their anonymous leader. As he walks to work, contemplating his upcoming retirement, Jim Gordon is almost killed by a 17-year old boy with an M60. In the course of rescuing a young child, Batman discovers that a cash-broke Army general and war hero has been arming the Mutants, in return for the money to help his sick wife. When Batman confronts him, the General commits suicide. Meanwhile, the Mayor has appointed a qualified woman as Gordon's successor, Ellen Yindel, who worships Gordon but despises vigilantes. And a young girl who owes her life to Batman, Carrie Kelly, decides to seek out her hero and takes on the role of Robin.

Following his leads, the Caped Crusader succeeds in tracking down the Mutant lair and defeating them with the Batmobile (which Miller reimagines as an armored supertank rebuilt by Batman during riots ten years ago, with large cannons and machine guns that, according to Batman, only fire rubber bullets). In a brutal hand-to-hand fight, Batman is defeated and almost killed by the Mutant Leader, as the aging Caped Crusader tries to prove to himself (and Alfred) that he is a force at any age. Luckily, Carrie, in her new Robin costume, has been following Batman, and manages to save him. Batman returns to the Batcave where Alfred tends his wounds (and argues with him over the danger to Carrie); meanwhile, the Mutant Leader is brought into custody. The Leader's absolute animalistic nature (and, hence, the animalistic nature of his underlings) is fully revealed when the Leader manages to tear out the Mayor's throat while in custody. Gordon and Batman conspire to defeat the Mutants psychologically by staging a fight between Batman and the Leader in front of the whole Mutant gang. Using his greater experience and his environment, Batman cripples the Mutant Leader in full view of his followers. While many of the Mutants are arrested, many more now latch on to Batman as their role model, dubbing themselves the "Sons of Batman." However, their interpretation of Batman's quest will leave much to be desired. The issue ends with James Gordon, looking forward to his retirement from the madness of Gotham and regretting the predicament that Batman will find himself in: caught between criminals and the police.

Retrieved from "https://heykidscomics.fandom.com/wiki/Batman:_The_Dark_Knight_Returns_Vol_1_2?oldid=1413563"
Community content is available under CC-BY-SA unless otherwise noted.