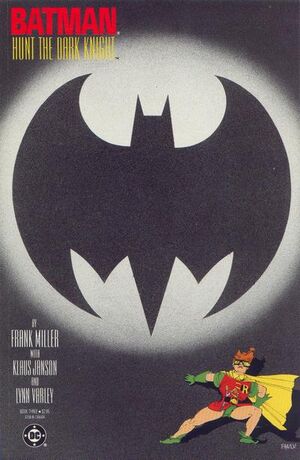 A gun is a coward's weapon. A liar's weapon. We kill too often because we've made it easy... too easy... sparing ourselves the mess and the work.

Appearing in "Hunt the Dark Knight"Edit

Synopsis for "Hunt the Dark Knight"Edit

"Hunt The Dark Knight" returns Batman to his classic struggle, against the incomprehensible madness of the Joker. Newly awakened from his catatonia, the Joker has been slowly returning to his mad schemes while still incarcerated. He convinces his psychiatrist, the fame-seeking (and Batman-hating) Dr. Bartholomew Wolper, that he is not only sane but regretful. Seeking to discredit Batman, Wolper intends to exhibit the Joker on a late-night show ("David Endochrine", parodying Late Night with David Letterman) in order to "prove" that the Joker is actually a victim of Batman's own "psychosis." Not pleased with this turn of events, Yindel places a heavy guard on the building. However, she still sees the primary threat as Batman and intends to arrest him if he appears. As the police are occupied with attacking Batman, the Joker murders everyone in the studio (including Endochrine and Wolper) with his "smile gas" (Smilex) and escapes. Batman follows him to Selina Kyle's, where the former Catwoman has become a depressed, alcoholic and overweight madame. The Joker uses two of her girls to drive local politicians to suicide. He then beats and dresses Selina Kyle up as Wonder Woman, leaving a clear clue for Batman to follow.

When the police burst into Selina's flat, Batman and Robin escape, but Yindel notices the young sidekick and adds "child endangerment" to the list of charges against Batman. But he then calls her up on her radio to say that it is up to her to rescue the Governor from another Joker threat. Yindel is left lost for words.

With the police on his heels, Batman, accompanied by Robin, tracks the Joker down to a county fair. They arrive too late to prevent the Joker from poisoning to death a group of young Cub Scouts, but Robin is dispatched to prevent the Joker's accomplice from blowing up a rollercoaster loaded with riders. Robin succeeds in getting the bomb clear of the ride on the moment of exploding, but in the fight that follows the Joker's accomplice is killed. Meanwhile, Batman pursues and defeats Joker in a bloody and violent showdown. Throughout the past days, the Batman has been preparing to do what he never could before: kill the Joker and end the cycle of meaningless deaths once and for all. But in the end, he still cannot bring himself to kill his old enemy, stopping himself before fully killing the Joker, leaving him paralyzed instead. The Joker, laughing madly, commits suicide by twisting his own broken neck, intending for the police to charge Batman with murder.

In this issue, Superman is introduced as an undercover agent for the American government (under a President who is unnamed but recognizable as Ronald Reagan). Superman travels to Gotham to persuade Batman to keep a low profile. However, tensions with the Soviet Union are reaching a head over U.S. support for a South American country named Corto Maltese (a reference to the comic strip by Hugo Pratt), and Superman is called away to "deal with it." He and other super-heroes, like Green Arrow and Wonder Woman, are referred to only by their civilian names: i.e., "Clark" or "Kent", "Oliver" and "Diana".

Also, the Sons of Batman have begun to make their presence known, taking an even more brutal - and deadly - tack towards criminals than Batman. Despite Batman's non-involvement, the actions of the "SOB's" only incenses the growing anti-Batman forces in the government and media further.

Retrieved from "https://heykidscomics.fandom.com/wiki/Batman:_The_Dark_Knight_Returns_Vol_1_3?oldid=1413564"
Community content is available under CC-BY-SA unless otherwise noted.