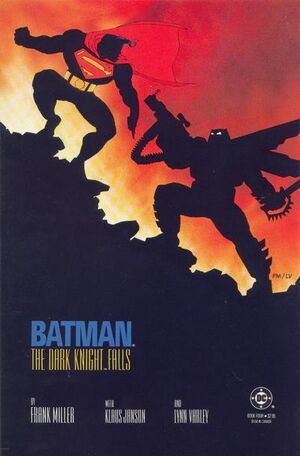 We could have changed the world. Now...look at us. I've become...a political liability...and you...you're a joke. I want you...to remember, Clark...in all the years to come...in your most private moments...I want you to remember...my hand...at your throat. I want...you to remember...the one man who beat you.

Appearing in "The Dark Knight Falls"Edit

Synopsis for "The Dark Knight Falls"Edit

All these threads converge in "The Dark Knight Falls", when the USSR launches a nuclear warhead called Coldbringer in response to Superman's presence in Corto Maltese. Superman manages to divert the missile to an uninhabited desert area before it detonates, but damage is done nonetheless. The warhead was designed to disrupt all electronics and communications in the Western Hemisphere as well as throw millions of tons of dust and debris into the atmosphere. Deprived of the sunlight that gives him his powers, Superman nearly dies. Gotham descends almost immediately into chaos as the blackout hits, with rioting and looting rocking the city. An airplane crippled by the electromagnetic pulse crashes into a building, feeding the panic. A few citizens, including Jim Gordon, pull together to fight the fires and retain some semblance of civilization until the power is restored.

Though near death from wounds inflicted during his fight with the Joker and the police, Batman applies his ingenuity to restoring law to Gotham. He and Robin muster a force of SOBs and train them in non-lethal methods as a means to stop looting and ensure the flow of needed supplies. Gotham, ironically, soon becomes the safest and best-fed city in America. Seeing this as an embarrassment rather than a blessing, the U.S. government dispatches Superman to take the Dark Knight down. Warned of their plans by Oliver Queen, the former Green Arrow who is now a bitter one-armed revolutionary, Batman prepares for his ultimate clash. Armed with an artificial powered exoskeleton, the Batmobile, synthetic kryptonite and a mysterious pill, Batman confronts Superman in a final showdown at Crime Alley, where Wayne's parents were murdered decades earlier. Batman manages to defeat the weakened Superman, only to apparently die of a heart attack at the stroke of midnight. At precisely the same moment, Alfred oversees the destruction of the Batcave and Wayne Manor, suffers a fatal stroke immediately afterward (his last thought as he realizes that he is dying is "how utterly proper").

The news that Bruce Wayne was Batman spreads throughout the world; however, Wayne's stocks and funds have been sold and liquidated to his "heirs" and Wayne boardmembers, Wayne Manor and Batcave destroyed, and all evidence as to his methods and tools wiped out. At a funeral attended by Gordon, Kyle, Yindel, Carrie and others, Superman (as Clark Kent) is plainly ravaged with sadness and guilt. Just as he turns to leave, however, he hears a faint heartbeat coming from the interred coffin. After staring at Carrie for a few silent moments, Kent gives her a wink and leaves. Wayne has faked his death with planning, skill, and his knowledge of chemistry; Carrie digs up his living body as soon as possible. Wayne had hoped to keep the secret even from Superman; with his wink, however, Kent confirms Wayne's hope that he would play along with the charade. Bruce Wayne, finally looking forward to his life, leads Robin, Green Arrow, and his army deep into the unexplored caverns beyond the Batcave, preparing to continue his fight for justice in a more low-key, but equally important, way than in his "previous life."

Retrieved from "https://heykidscomics.fandom.com/wiki/Batman:_The_Dark_Knight_Returns_Vol_1_4?oldid=1413565"
Community content is available under CC-BY-SA unless otherwise noted.