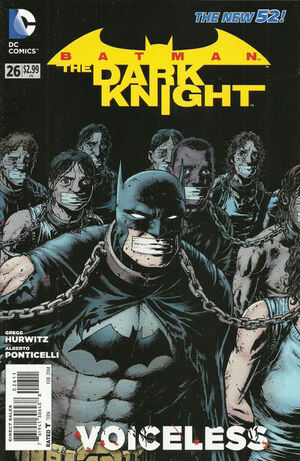 Across the US-Mexican border, a woman struggles to keep up her job in an assembly factory, accidentally breaking one of the Christmas ornaments she'd been making. One too many mistakes, the foreman throws her out. She returns home, where her mother and two children are not faring well. Hoping to buy medicine for her baby, she arrives too late to the pharmacy, and receives no help from the owner. Before long, her baby is dead. At his funeral, a relative suggests she move to Gotham City, but she rejects the advice.

Soon, her daughter becomes ill as well. Realizing she has little choice, if she wants to see her daughter survive, she decides to go to Gotham, via an illegal human-smuggling ring. En route, the men bringing them across the border sell them to slavers, who separate the woman from her mother and child.

Eventually, sick girl and her grandmother are working in a sweatshop with a view of Gotham Square, ironically making Christmas ornaments on an assembly line. Hearing her granddaughter's coughing one night, the older woman seeks to escape and get help, but is caught, receiving a stab wound before falling from a high window into an alley. Somehow, though, she manages to drag herself away. Angrily, The Penguin punishes his men for allowing her to escape.

Meanwhile, the stumbling and wounded grandmother collapses in the street, and is found by the Batman. Crumpled in her hand, he discovers a flyer for the workshop where her family is being kept, and becomes enraged that this could be going on in his city.

The girl wakes in her bed to the sound of an alarm, and prays for an angel to save her. The Batman comes instead, smashing through a window, and upon realizing how poor her health is, takes her directly to the hospital.

Back at the sweatshop, he makes an attack against the slavers, freeing the children. Though they escape, he ends up caught in the slavers' nets, and captured. When the Penguin learns what his men have caught for him, he is elated.

Retrieved from "https://heykidscomics.fandom.com/wiki/Batman:_The_Dark_Knight_Vol_2_26?oldid=1411700"
Community content is available under CC-BY-SA unless otherwise noted.