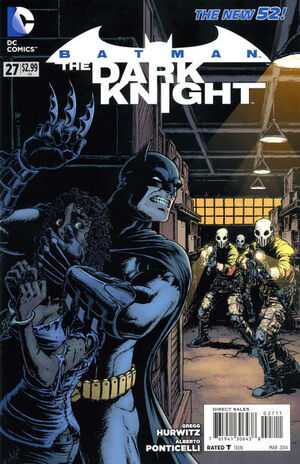 Appearing in "Angel of Darkness"Edit

Synopsis for "Angel of Darkness"Edit

Batman has been captured by the Penguin, whom he caught in the act of slave trading. From his cage, though, he manages to grab one of the slavers' whips, using it to latch onto a Jack (Device), which he uses to stretch the bars of his cage apart enough for him to squeeze through. Once free, he uses an explosion as a distraction to take down the Penguin's slavers, and stuff them all into the same, small cage together.

Finally returning to Wayne Manor, Bruce uses the scrap he recovered from a woman who died trying to escape the slavers to implicate the Lil Elf Workshop, owned by Holiday Cheer Inc. as one of the central hubs of the trade. That night, he sneaks into the workhouse, and disgusted by the slavers' actions, chooses not to restrain his more violent impulses. Still, he leaves them alive to be bound and subdued with the help of the freed workers. Finding the woman whose mother it was that had helped him find the place, Batman offers her his hand.

Commissioner Gordon has since discovered the cage full of slavers, and soon receives a call sending him to the workhouse, where he discovers the prisoners and captured slavers. Batman, meanwhile, takes the woman to the hospital where he had earlier taken her daughter, and their reunion is tearful.

Soon, the Penguin learns of his employees' failures, and is naturally outraged, returning with his men to dispose of the workers who remain under his thumb. Batman intervenes, leaving no one unpunished.

The woman and her daughter, once recovered, visit the Wayne Enterprises sponsorship for new citizens program's office, and before long, she has a job at Wayne Tower, and every day, Bruce Wayne passes by her desk. After some time, Christmas arrives, and as she and her mother put out the light for sleep, the girl is visited by the Batman, who is only there to check in, and wish her a happy Christmas, her guardian angel.

Retrieved from "https://heykidscomics.fandom.com/wiki/Batman:_The_Dark_Knight_Vol_2_27?oldid=1411701"
Community content is available under CC-BY-SA unless otherwise noted.