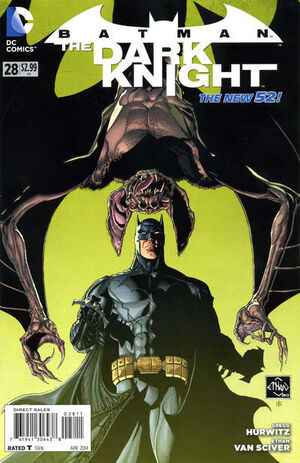 It's an addiction. Like money. Like power. There are high-- soaring highs. And withdrawal. I can make it through the day. Without. But at night... the hunger comes.

Ana apparent murder has occurred, and the Gotham City Police Department is on the scene, examining their third corpse in a week whose blood was completely drained from his body through two puncture marks in his chest. As he wonders what could do something like that, Jim Gordon realizes with some consternation that while his back was turned, the Batman plucked evidence right out of his hand.

Soon, Batman is crashing through the window of Dr. Kirk Langstrom's lab, and already Langstrom knows Batman suspects him of the murders. He warns that while the Man-Bat Serum was found in the saliva swabbed from the victims' wounds, the full analysis will show that it's not his serum. Batman looks into his eyes and decides the man is telling the truth, but warns that if he's being lied to, he'll be back. If it's not Kirk Langstrom, though, it begs the question who it is.

Abraham Langstrom, meanwhile, has been busy. Between life as a business mogul and secretly buying up the world's supplies of Man-Bat serum, he's been busy. Where his son Kirk had developed the serum to help the deaf, he would use it to squeeze money from the deaf, and make millions, whether it helps them or not. And while he's already bringing in cash with the serum's off-brand applications, Abraham has come up with a further positive. Using the serum on himself is fun. By day, he resists his addiction, but at night, he indulges.

In the Batcave, Alfred discovers that the saliva sample Batman took shows that Kirk Langstrom was telling the truth. It is a markedly different sample than those previously taken from him - and a stronger formula of the serum than even the one released on the 900 block some time ago. Still, the DNA is identifiable as belonging to someone of the same family of DNA - and whoever it belongs to is a more powerful Man-Bat than they've yet seen. All the more reason, Batman says, to begin developing an antidote. Despite the necessity of stopping this creature, Alfred expresses reservations. Man-Bat is, in more ways than the obvious, the reverse of Batman. Soon, the computer returns the results of the analysis, revealing that this version of the serum contains a protein developed by Patriarch Biopharmaceuticals, whose CEO is Abraham Langstrom.

Meanwhile, Abraham is already out hunting prey in settlements of homeless people.

Travelling to Wayne Enterprises, Bruce Wayne visits Lucius Fox at the lab, who is suspicious of all of these favours for the Commissioner that Bruce has him doing. Even so, he explains that Abraham Langstrom was once a rival of Thomas Wayne's. While Thomas would put his life's blood into Gotham City, Langstrom was bent on getting as much as possible out of it. Despite his adversarial relationship with Thomas, though, Langstrom had always admired Bruce.

That night, Kirk visits his father at the Patriarch building, and is disturbed to learn what he had already suspected: his father had made the same mistake that he'd made. Scoffing, Abraham responds that he has improved upon Kirk's formula, and that is no mistake. Where Kirk failed, he found a way to stabilize and more importantly monetize the serum. Kirk warns that this improved serum has led his father to kill innocents, but Abraham responds that there are no innocent people. He warns Kirk to stay away from him, because if his son crosses him, he is not above seeing him dead.

Alfred expresses surprise that Bruce doesn't remember Abraham, given the man's fondness for him. While Abraham had always been disappointed in his son Kirk, Alfred supposes that he saw himself in Bruce; hard men of discipline and determination. Fortunately, Bruce is set apart from him by a moral compass.

When a satellite picks up the man-bat's movement, Batman flies out to intercept, and soon sees for himself how different this one is from the ones he's encountered in the past. This means that administering the antidote will not be an easy task, especially considering how adept a flyer Abraham seems to be. Risking an attempt to inject the antidote, Batman is disappointed when the syringe's needle-tip snaps off against Langstrom's rough hide. Angrily, Langstrom shakes him off, snapping the tether back up to the Batplane, and sending Batman plummeting stories down toward the streets.

Retrieved from "https://heykidscomics.fandom.com/wiki/Batman:_The_Dark_Knight_Vol_2_28?oldid=1411702"
Community content is available under CC-BY-SA unless otherwise noted.