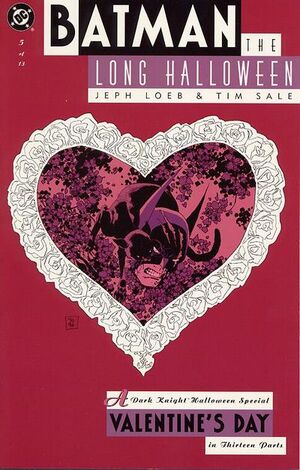 On Valentine's Day, Captain James Gordon and D.A. Harvey Dent arrive at Wayne Manor looking for Bruce Wayne. Alfred is alone at home and he lets them inside. After seing the portrait of Thomas and Martha Wayne, Dent asks Alfred in a rude way if he has ever heard of a man called Falcone. Alfred disregarded the question and tells them that it is very improbable that Bruce returns home early and he also reminds them that they should probably be doing something else at the moment. They realize that it was Valentine's Day and that none of them has something for their respective couples.

At the Gotham Cemetery, Carmine Falcone leaves a rose in his son's tombstone. Batman appears and asks Carmine if he thinks that it is worth it and he made the man realize of all the damage he has done. Carmine takes his gun and points it to Batman and just before the man is able to pull the trigger, Catwoman disarms him with her whip. Batman starts to follow her and is able to catch her. He asks her why was she nearby and she replied that she was just saving his life and they embrace their hands in an uncertain manner.

Later, Bruce Wayne meets with his date Selina Kyle at the Opera. They both arrived late and before they enter the building, a woman covered in rags offers them roses. Bruce buys one for Selina but he cut himself with the thornes and the woman who sold it was mysteriously glad about it.

At Maroni's restaurant, Sal Maroni makes a deal with Vernon Wells, the man who works for Harvey Dent. Maroni is planning to have a man inside the D.A.'s office to prevent his downfall. On the outside of the building, Maroni's henchmen were waiting for him inside a car. They discuss their luck for having to work on Valentine's Day. Suddenly, one by one they are shot from outside of the car by the Holiday killer and once they were all dead, the assassin placed a bomb in the car that exploded with all of the bodies inside. As usual, the killer left the gun and a heart-shaped box of chocolates near the car. Maroni goes outside and finds what Holiday has done and he declares war on him.

James Gordon and Harvey Dent arrive late at their respective places and both of them gave their wifes a heart-shaped box of chocolates for Valentine's Day.

Bruce arrives at Wayne Manor and is still holding the rose he bought earlier. Alfred asks him about his date with Selina but Bruce didn't reply, to which Alfred assume is a good sign. However, Bruce seems to be in a trance and guided by a voice he goes to the backyard of the manor and finds himself alone with Poison Ivy. Bruce falls Ivy's arms and she embraces him in a possessive way.

Retrieved from "https://heykidscomics.fandom.com/wiki/Batman:_The_Long_Halloween_Vol_1_5?oldid=1413570"
Community content is available under CC-BY-SA unless otherwise noted.