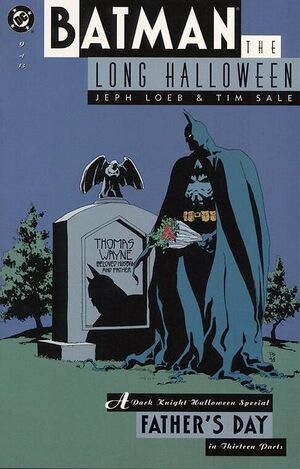 Many years ago, Vincent Falcone took his wounded son, Carmine to Wayne Manor. Vincent asked doctor Thomas Wayne to save his son's life in exchange for any kind of help. With Alfred's assistance, doctor Wayne saved Carmine's life but asked nothing in return, while a little Bruce watched all the scene, hiding in the staircase.

It's father's day in the present and Bruce Wayne is imprisoned for supposedly helping Carmine Falcone and his mafia business. Alfred stands in trial and Harvey Dent is the prosecutor. Harvey questions Alfred about his employer and Falcone's relation but Alfred replies that it is nonexistent. Dent asks about Thomas Wayne's involvement in the crime that almost took Carmine's life and Alfred replies that Thomas Wayne is not to blame for the inefficiency and corruption of the legal system in Gotham City. James Gordon, who is watching the trial, knows that the last statement will cost Harvey the case.

Sal Maroni visits his father Luigi Maroni. Luigi regrets not having eliminated Carmine Falcone when he could and advices his son, telling him to start acting like man and stand against his enemies. Hiding in the bushes nearby, Holiday prepares himself and when the time is right, he fires his weapon and murders Luigi Maroni, leaving Sal holding on to his father's corpse. Holiday leaves the gun and a father's day present in the scene, a necktie.

At Carmine Falcone's penthouse, Sofia Falcone gives him a present for father's day. Carmine takes the necktie with dissapointment and thanks her for the gesture, before leaving in order to attend some business. All this happened while, Catwoman watches the scene from afar.

James Gordon arrives home and finds his son James Jr. sound asleep. He notices a note for him in his son's cradle and a present as well. It is a necktie with little hands painted on it. Gordon takes off his old necktie and puts on his new one, while his wife Barbara watches the whole moment.

Meanwhile, on the Dent's house, Gilda finds Harvey alone in the basement. Harvey went to visit his father and he tells Gilda that his old man is still crazy as he has always been. However, this time, his father gave him a present, a lucky coin. Harvey reflects on the recent events and he believes that the justice system is controlled by chance, without consideration of his efforts and also feels bitter towards Bruce Wayne and the high society which he represents.

Meanwhile, in the Gotham Central Park, Scarecrow and The Mad Hatter are having trouble getting along. Carmine Falcone arrives just in time to prevent a fight between them and he tells them that they must be ready to take care of the Gotham City Bank business.

Back in Wayne Manor, Bruce wonders what would have happened if his father refused to help Carmine Falcone all those years ago. Alfred tries to tell him that it wouldn't have happened any other way and somehow he feels responsible for Bruce's situation due to his own lack of parental skills. Bruce remembers his father, admitting that he misses him dearly and Alfred tells him that he is the very reflection of Doctor Thomas Wayne.

Late that night, Vernon Wells calls Harvey Dent to the D.A.'s office to attend to some important business. Upon entering his office, Dent comes face to face with Sal Maroni, who offers Harvey a deal in order to stop Carmine Falcone once and for all.

Retrieved from "https://heykidscomics.fandom.com/wiki/Batman:_The_Long_Halloween_Vol_1_9?oldid=1508264"
Community content is available under CC-BY-SA unless otherwise noted.