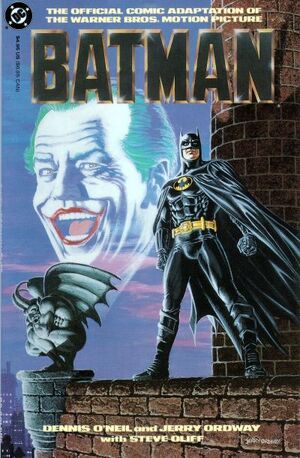 Tell me my friend, have you ever danced with the devil in the pale moonlight?

As Alexander Knox, a reporter for the Gotham Gazette, pursues the story of the mysterious vigilante of the night called Batman with the help of news photographer Vicki Vale, Carl Grissom has Jack Napier raid Axis Chemicals to remove any evidence of its ties to Grissom's criminal empire, using the raid as a set-up to remove Napier for his affair with Grissom's wife Alicia. Batman takes down Napier's men and attempts to rescue Napier from falling into a vat of chemicals, but fails in doing so, causing Napier to be changed into the maniacal terror known as the Joker. During Vicki's investigation of Batman's alter ego Bruce Wayne, she discovers a secret of his that eventually leads her to connect the two people together, but she also becomes the object of the Joker's desire as he pursues her, killing people with his Smylex formula as he heads to his ultimate confrontation with the Dark Knight at the Gotham City cathedral tower. With the Joker's defeat, Batman gives Commissioner Gordon a signal to summon him in future times of need, and Vicki ends up leaving Knox as she goes off on a date with Bruce Wayne.

Retrieved from "https://heykidscomics.fandom.com/wiki/Batman:_The_Official_Comic_Adaptation_Vol_1_1?oldid=1431002"
Community content is available under CC-BY-SA unless otherwise noted.