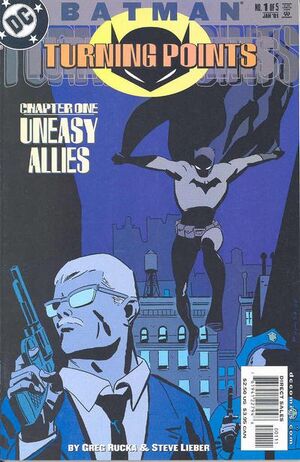 Everyone needs a friend.

Appearing in "Til Death Do Us Part"Edit

Synopsis for "Til Death Do Us Part"Edit

Captain Gordon returns home to discover that his wife Barbara has left him, taking their son back to Chicago and filing for divorce. Later, he is called to deal with a hostage situation at a church, where a lone gunman has interrupted a wedding. When he learns that the man, Doctor Hale Corbett, lost his wife and son in a car-crash that morning, Gordon feels a great sympathy for the man. Reluctant to allow Branden to take the SWAT unit in to the situation, fearing that none of the hostages will get out alive, Gordon trusts Batman to handle the situation. Batman is able to disarm Corbett, believing that the man, although deeply grief-stricken, does not want to hurt anybody. That night, he drops in to see Captain Gordon to offer his sympathies - Gordon thinks this is presumptuous, but Batman reminds him that everyone needs a friend.

Retrieved from "https://heykidscomics.fandom.com/wiki/Batman:_Turning_Points_Vol_1_1?oldid=1413483"
Community content is available under CC-BY-SA unless otherwise noted.