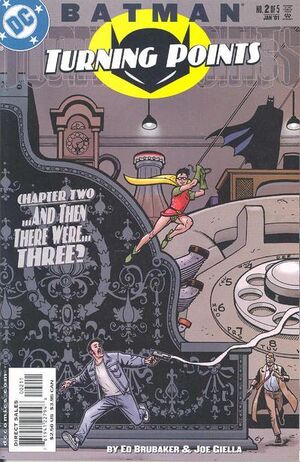 What's there to understand, exactly? You're training some kid to follow in your footsteps! Putting him in the path of bullets and madmen!

Captain Gordon is very concerned - several criminals recently claim to have encountered a young boy when they were stopped by Batman - it seems that Gotham's protector has begun endangering a child's life and Gordon does not approve. The most recent report comes from one of Mr Freeze's men. When he summons Batman to talk about the situation, his friend explains his reasons for taking the boy on and suggests releasing Freeze's henchman. Gordon does so, and soon the police and vigilantes are able to converge on the villain's current hideout. Several police officers are frozen to death in the encounter, though Robin saves the Commissioner's life. When Robin is threatened, the Commissioner can see the same concern in Batman's eyes that is in his own when he thinks of his adoptive daughter Barbara. He doesn't know who this 'Robin' is, but he sees him as much-needed 'family' for the Dark Knight.

Retrieved from "https://heykidscomics.fandom.com/wiki/Batman:_Turning_Points_Vol_1_2?oldid=1413484"
Community content is available under CC-BY-SA unless otherwise noted.