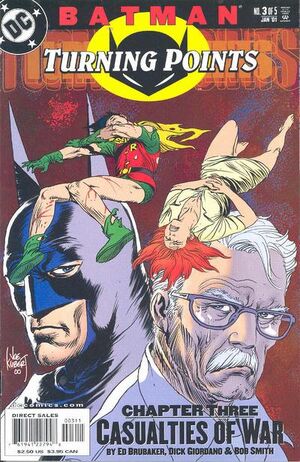 He feels it the same as you do. The guilt, the doubts... only unlike you, he isn't used to going it all alone. He needs his friend.

In the wake of the death of Jason Todd and of Barbara Gordon's shooting, both at the hands of the Joker, Batman has become distant and remote. He isn't answering the Bat-Signal, and he is beginning to think that he should remain in the shadows, just a rumour. If he does, then maybe Gotham will stop producing monsters like the Joker, and he can live with his guilt. Barbara Gordon comes to see him and shocks him out of his isolationism - her father isn't used to coping with things alone like Batman is, and he needs his friend around. Batman has a heart to heart with Commissioner Gordon, and agrees to continue helping the police department whenever they need him. They console each other for their recent tragedies, and reaffirm their friendship.

States in story that “2 months ago, a monster took the legs of Jim Gordon’s daughter”. Barbara and Bruce talk for the first time since the events of Batman: The Killing Joke.

Retrieved from "https://heykidscomics.fandom.com/wiki/Batman:_Turning_Points_Vol_1_3?oldid=1499550"
Community content is available under CC-BY-SA unless otherwise noted.