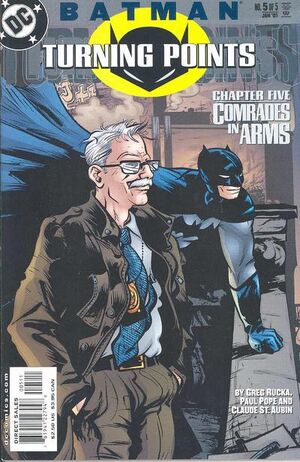 You told me that everyone needs a friend. You've been mine. I hope to God that I've been yours.

Appearing in "Old as the Stars"Edit

Synopsis for "Old as the Stars"Edit

Following the arrest of Grigor Bulenkov, the Organised Crime Bureau gets word that the Russians have planned revenge, intending to attack a member of Gotham's council. The Major Crimes Unit are detailed to help protect the men and women whose lives are in danger, and the Commissioner accompanies Detectives Allen and Renée Montoya on their duty. The house of the man they are protecting, a Ukrainian émigré named Gribanov (one of the city's few truly honest politicians), comes under attack. Batman is also on the scene and aids them against the gunmen.

At the same time, Hale Corbett has returned to Gotham and is trying everything he can in order to speak to the Commissioner and Batman - when James finally tells the Caped Crusader about this, they both suspect that he's looking for revenge for their interference with his affairs over ten years ago. However, when they catch up to him on the roof of police headquarters, they discover that he has actually come to thank them - they stopped him doing something stupid, and he has been able to rebuild his life since then. He has brought his new wife and adorable daughter along to meet them. The two old friends are pleased to see such a positive display of the fruits of their work.

Retrieved from "https://heykidscomics.fandom.com/wiki/Batman:_Turning_Points_Vol_1_5?oldid=1413487"
Community content is available under CC-BY-SA unless otherwise noted.