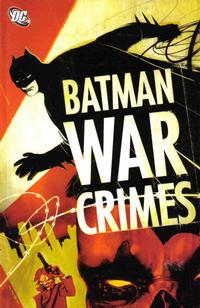 This story takes place in the wake of Gotham's recent, and brutal, gang war from War Games. Batman is blamed by the city for the recent chaos, and heavily criticized for endangering children.

This paperback collects stories from the following comic books:

Retrieved from "https://heykidscomics.fandom.com/wiki/Batman:_War_Crimes_(Collected)?oldid=242645"
Community content is available under CC-BY-SA unless otherwise noted.