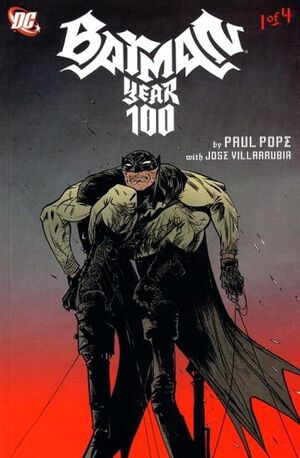 In the year 2039, Gotham City is very nearly a police state, its citizens subject to unwarranted search and seizure. The Gotham Police clash almost daily with Federal agents, who are pursuing the legendary "Batman". Captain Gordon, the grandson of the original Commissioner Gordon, is also trying to find Batman, and find out what he knows about the murder of a Federal agent.

Retrieved from "https://heykidscomics.fandom.com/wiki/Batman:_Year_100_Vol_1_1?oldid=1413647"
Community content is available under CC-BY-SA unless otherwise noted.