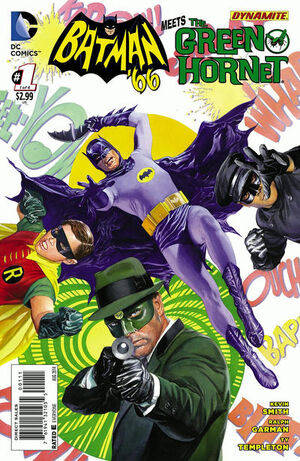 Appearing in "On the Wrong Track"Edit

Synopsis for "On the Wrong Track"Edit

Robin is preparing to go on a date with Bonnie Linseed, the mayor's niece and one of the most popular girls at Woodrow Roosevelt High. Bruce Wayne comments that she's an amateur paleontologist, and would be interested in the collection of priceless fossils from the Gotham Museum of Natural History. In the study, Alfred Pennyworth takes a phone call from Commissioner Gordon asking Batman to watch over the shipment of priceless fossils, owned by Franco Bollo, which is being transported on board the Gotham Express. Dick is resigned to the fact he will have to call off his date with Bonnie, but Bruce assures him he can handle it himself. Bruce Wayne is the chairman of the museum's board and will not arouse suspicion by accompanying the exhibit.

Bruce is aboard the train and is chatting to the explorer Franco Bollo when Britt Reid, publisher of the Daily Sentinel, and his valet, Kato enter the VIP car. Bruce and Britt decide to go to the refreshment car and discuss the exhibit. Britt comments that he would have expected to see Batman accompanying the exhibit on its journey especially as Britt has heard that criminal gangs from Sentinel are interested in the fossils.

Suddenly the train grinds to a halt an yet Bruce notices that the breaks are not being applied. Bruce and Britt decide to investigate what his happening and they go to see the engineer. They discover that the train is at full power but yet is not moving so they leave the train, discovering that the tracks are covered in glue and cannot move. Britt and Bruce make excuses to split up. Bruce uses the "Two-Way Bat-cufflink Radios" to call Dick, who is in the diner with Bonnie and tells him to use the Bat-Copter to get to the train. Bruce enters the cargo car only to be greeted by Colonel Gumm. Whilst Bruce and Colonel Gumm are arguing over the fossils, The Green Hornet enters with Kato. The Green Hornet is upset that Colonel Gumm is trying to steal the fossils right under his nose. Colonel Gumm's henchmen and the Green Hornet start to fight just as Robin arrives in the batcopter with Batman's equipment. Colonel gum's henchmen have overpowered the Green Hornet and Kato , so the Colonel decides to retreat in "victory" only to be met by Batman and Robin on top of the train.

Colonel Gumm turns to run, only to be stopped by the Green Hornet. Colonel Gumm tells the story of how he ended up with his white face. Just after his release from Gotham Penitentiary, he attempted to make the world's most powerful adhesive. unfortunately his concoction was too volatile causing it to explode and stick permanently to his face, turning him from Colonel Gumm to General Gumm. General Gumm pulls out a glue gun and shoots Batman, Robin, Green Hornet and Kato's feet, sticking them to the top of the train.

The General then steals the fossils and unsticks the train causing it to move towards the tunnel with all four of them stuck to the top.

Has the prince of paste doomed the dynamic duo? Will the master of mucilage squash the Green Hornet and Kato like bugs?

Retrieved from "https://heykidscomics.fandom.com/wiki/Batman_%2766_Meets_The_Green_Hornet_Vol_1_1?oldid=1511829"
Community content is available under CC-BY-SA unless otherwise noted.