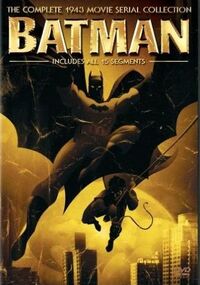 Batman was a 15-chapter serial released in 1943 by Columbia Pictures.

The film is notable for being the first filmed appearance of Batman. Also, the film introduced "The Bat's Cave". The name was altered to the Batcave for use in the comic books as well as the Grandfather's clock entrance. Also, the comic Alfred was overweight and clean-shaven prior to the serial's release. Austin was trim and sported a thin mustache. The comic Alfred's appearance was altered to match that of Austin's, and remains the same to this day.

Retrieved from "https://heykidscomics.fandom.com/wiki/Batman_(1943_Serial)?oldid=1489663"
Community content is available under CC-BY-SA unless otherwise noted.