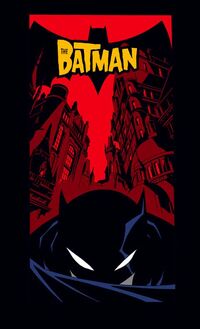 The Batman premiered in September of 2004 on the Kids WB cartoon block. This program exists outside the shared continuity established by Batman – the Animated Series, Justice League or even, Batman Beyond. The series focuses on a younger Bruce Wayne whose brief career as the Batman has barely lasted even three years. At the start of the first season, Batman has yet to meet the cadre of villains that fans have been familiar with for decades, including the Joker, Mister Freeze and Bane.

The series is also notable for three brand new characters, exclusive to the continuity of this cartoon alone: Gotham City police chief, Angel Rojas, detective Ellen Yin, and Bruce’s high school pal, detective Ethan Bennett. All three characters dominate the supporting cast for the entire first season, but fade away into obscurity with the close of season two.

Season three opens with a new theme title track, as well as the introduction of another mainstay supporting cast member – Batgirl. Defying comic book tradition, Batman grudgingly takes young Barbara Gordon on as his new sidekick partner – a role canonically assumed by the character of Robin – the Boy Wonder.

With Season four, the Boy Wonder was finally introduced, becoming a permanent supporting cast member, featured in nearly every episode. By Season five, other members of the DC Universe began making appearances including the Martian Manhunter, Superman, the Flash, Green Arrow and Hawkman. The heroes were first addressed as the Justice League of America in the epilogue to the season four finale "The Joining (Part II)", but were featured with greater prominence in the 2008 two-part series finale "Lost Heroes". The final episode of the series was broadcast on March 8, 2008.

Retrieved from "https://heykidscomics.fandom.com/wiki/Batman_(2004_TV_Series)?oldid=1530694"
Community content is available under CC-BY-SA unless otherwise noted.