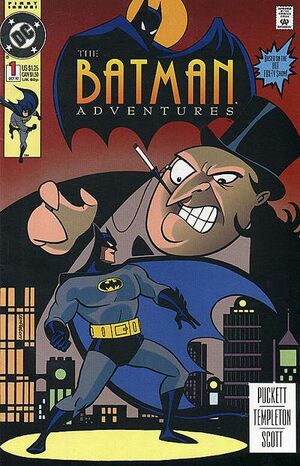 I must say, sir, that when I observe the Penguin's efforts at conquering the field of public opinion... I find myself wishing he'd stuck to crime.

The Penguin conspires with the Joker in an effort to become the new "top dog" of Gotham's underworld. He publicly renounces crime and seemingly overnight, becomes one of the most philanthropic men in the entire city. He appears on television talk shows announcing his pledge to help out Gotham's various charity foundations.

At the Batcave, Bruce Wayne and his butler, Alfred, are incredulous of the supposedly reformed Penguin. Batman knows that he's working an angle, but has yet to figure out what it is.

He soon learns that the Penguin is secretly robbing institutions owned by Gotham's wealthiest industrialists, thus bankrupting them, and enabling him to take their place as a community leader. Bruce Wayne engineers a trap, baiting the Penguin to break into the Wayne Financial Institution. The Penguin falls for the trap, and Wayne apprehends the Penguin and his goons as Batman. He is unaware of the Joker's involvement in the Penguin's rise and subsequent fall from power.

Retrieved from "https://heykidscomics.fandom.com/wiki/Batman_Adventures_Vol_1_1?oldid=1413321"
Community content is available under CC-BY-SA unless otherwise noted.