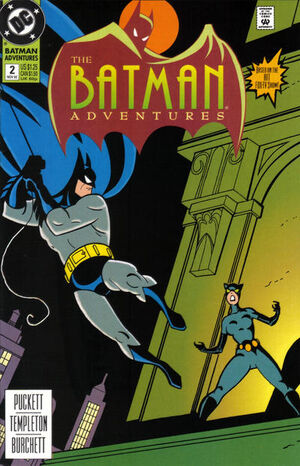 After a routine burglary, Catwoman is paid a surprise visit by the Joker via a special videophone. The Joker gently prods her into stealing the Crown Jewels of England, framing it as a certain way of attracting Batman's attention, and asks for a small favor: that she steal and send him a certain "insignificant item" from the Tower of London. Catwoman accepts the challenge, and quickly succeeds in stealing the jewels, leaving behind a card with a bat insignia as a taunt to Batman.

Batman quickly catches wind of the robbery, and travels to England in his civilian guise of Bruce Wayne. After a guided tour of the tower from the curator Mr. Helmsley, he eventually deduces how Catwoman had stolen the jewels: instead of taking them out of the building, she had actually hidden them beneath the pedestal, intending to retrieve them later. Shortly after, Batman saves an English news crew from an escaped convict, and asks that they deliver a message to Catwoman calling her a "harmless petty thief".

The message enrages Catwoman, as planned. As midnight nears, she returns to the Tower of London to retrieve the jewels, only to encounter Batman. The Caped Crusader chases Catwoman across London's rooftops and eventually recovers the jewels, but fails to apprehend Catwoman. Once again, the Joker is left the ultimate winner: Catwoman had sent him the item he'd requested, and Batman remains unaware of his involvement.

Retrieved from "https://heykidscomics.fandom.com/wiki/Batman_Adventures_Vol_1_2?oldid=1606432"
Community content is available under CC-BY-SA unless otherwise noted.