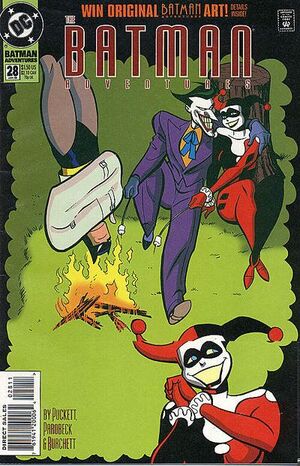 Four more loony lawmakers and we'll be ready for a Christmas show they'll never forget. And I owe it all to you... Herr Doktor.

Appearing in "Twelve Days of Madness"Edit

Synopsis for "Twelve Days of Madness"Edit

As Christmas approaches, an incarcerated Joker and an escaped Harley Quinn conspire to hijack Arkham Asylum's Christmas pageant with a show of their own. To this end, Harley disguises herself as a prominent psychiatrist and injects a dozen city councilmen with a special strain of Joker Venom that induces violent psychosis. The maddened councilmen are admitted to Arkham Asylum, where the Joker trains them to perform a twisted take on The Twelve Days of Christmas.

Batman eventually uncovers the scheme and rushes to Arkham, where he quickly exposes Harley and defeats the maddened councilmen. Cornered, the Joker throws a vial of the venom he injected the councilmen with, but instantly changes his mind upon realizing the consequences of a violently psychotic Batman. In a panic, he orders Harley to catch the vial.

Harley manages to stop Batman from being exposed to the Joker Venom, but at the cost of being exposed to it herself. The chemicals render her already-fragile mind completely comatose, and she spends the rest of the holiday season dreaming of a perfect Christmas where the Joker proposes marriage.

Retrieved from "https://heykidscomics.fandom.com/wiki/Batman_Adventures_Vol_1_28?oldid=1606431"
Community content is available under CC-BY-SA unless otherwise noted.