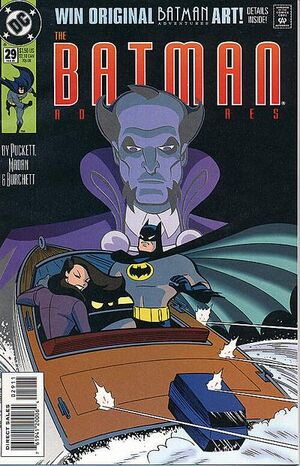 I hope you'll forgive my idle musings... but I've often wondered what future you and Miss Talia might have with her father... out of the picture.

Ra's al Ghul meets his apparent demise somewhere near Hong Kong, much to the grief of his daughter and the ambivalence of Batman. A week later, Batman and Talia encounter one another in Macao, both pursuing a dangerous invention known as the Tesla Device. A mysterious figure named Narayan supposedly plants to smuggle the device into Nepal, where it will trigger a machine that can hold the world hostage.

After several adventures, Batman and Talia arrive at Nepal with the device in hand. There, they discover Narayan's hideout, which indeed contains a machine built to amplify the device's powers. Once triggered, the machine will destroy all other electrical machinery on the planet, forcing mankind back into a pre-industrial society.

In her late father's memory, Talia betrays Batman and prepares to trigger the machine - much to the delight of Narayan, who reveals himself to be none other than Ra's al Ghul. Ra's admits that he had deliberately faked his death to avoid detection from Batman, trusting that Talia would be properly motivated to carry out her "late" father's dream.

Stung, Batman quickly destroys the Tesla Device and leaves a shaken Talia behind, having finally accepted Talia will always love her father more than him.

Retrieved from "https://heykidscomics.fandom.com/wiki/Batman_Adventures_Vol_1_29?oldid=1683660"
Community content is available under CC-BY-SA unless otherwise noted.