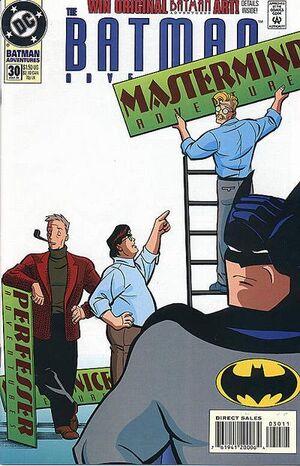 You don't mind if I explain a little something about myself before I answer that question, right?

A small-time criminal named Marty and his girlfriend Erica spend twelve years piecing together a treasure map, which supposedly leads to an enormous pearl. The final piece, however, is stolen by Mastermind, Mister Nice, and the Perfesser, who are quickly caught and re-incarcerated. Determined to complete the map, Marty infiltrates the state penitentiary as a reporter and tries to interrogate the trio without arousing their suspicions.

To Marty's consternation, Mastermind and Mister Nice refuse to answer any questions about their latest heist, instead telling him stories about their childhoods. The Perfesser presents Marty with even worse news: the trio had known about the pearl all along, and deliberately let themselves be arrested so Marty would come to them. The stories had been a distraction, so Mister Nice could steal the rest of the map behind Marty's back.

Shortly after, the four men are confronted by Erica, who steals the map from them at gunpoint. Enraged by his constant failures, Marty throws caution to the wind and attacks Erica, eventually overpowering her and stealing her escape helicopter. With the map finally complete, an ecstatic Marty flies off to find the pearl.

Mastermind stews over his latest failure, only for the Perfesser to reveal that he'd known the pearl's location all along. The trio escapes the penitentiary and travel to there, only to discover - along with Marty - that the map actually leads to a giant oyster; its pearl will not be finished for another twelve years.

Retrieved from "https://heykidscomics.fandom.com/wiki/Batman_Adventures_Vol_1_30?oldid=1684594"
Community content is available under CC-BY-SA unless otherwise noted.